Life is what happens while you’re trying to knit one, just one, tiny  baby blanket. My life happens so much that that when in the fall of 2017 I started said  baby blanket, I purposely chose  an unassuming pattern and  a discreet blue yarn. I would not tempt fate.

I really HAD to finish this easy little blanket, because I expected  a new angel baby in January 2018 who would need it.  He  didn’t literally need it, but he would be the first grandchild  to not born as an only child, and Mimis are here to make every grandchild feel like the first and only one. Meaning  that no matter how much life intervened, this baby would have a blanket knitted by Mimi, just like the other three grandchildren.

To that end  in the fall I started the easiest baby blanket in the world, basically an enormous version of the dishcloth all beginners knit. Theoretically it could be completed in a week, but I had until early January to complete it. Somehow in the first few rows I dropped stitches again and again. I didn’t like the look of my fixes though, so again and again I started over, enough times to make me wonder if this yarn  really realized its destiny of becoming a possible lovey for a sweet little boy.

Now I simply ask that you believe me when I say that despite my efforts I did not complete the easy little thing before  Christmas. My fall was throughly taken up with a knitting retreat, two trips to California, and the flu followed by a nasty upper respiratory infection. Life intervened relentlessly while my new grandbaby’s appearance loomed closer and closer.

Most days that fall  my  knitting sat curled forlornly in a plastic bag. The unfinished project began to symbolize my creative life in recent times: started, started over, started over, rolled into a ball, jammed into a plastic bag, likely with a hole in it, and tossed carelessly  into a dark closet with other bags such as itself. The little blanket when finished would win no prizes, yet I prized the idea that my grand mothering  life could coexist with my creative life. I was not ready to give up on my goal.

Two days after Christmas I took a short trip to Fall Creek Falls State Park with my friend Randy. We were in search of a few peaceful days, and for the most part we got them. We spent our days hiking trails, and returning to spend the evenings in the cabin in front of our gas fireplace. We watched movies, ate, chatted, and FINALLY I could  knit the night away on my still unfinished blanket. Finally the blanket and I were in  tune, humming along toward a timely completion.

My daughter Cameron’s  due date was January 9th. I planned to arrive in  Seattle  on the sixth so we could complete some last minute  preparations. And drink coffee. I brought the unfinished blanket, which I planned to finish and block in the days before the baby came.

On January 6th, after hurrying to make my connection to Seattle, I ran to use the ladies’ room while the plane boarded. That’s when the phone rang  with a face time call from my daughter , who face times me every day. “Are you on the plane?” she asked. “I’m trying to pee,” I complained. “My plane is at the very last gate, and can you believe they gave me a window seat?” And THAT’s when I realized that not only Cameron, but also my son in law Eric  AND A BRAND NEW BABY BOY  were all with me in the little bathroom!!!

“Wait,  wait don’t hang up,”  I kept saying as I scrambled out of the lavatory,  for no son in law should have to witness his mother in law in the loo, while simultaneously  trying to zip up my pants without dropping the phone, all the while demanding more facts about the baby. Woe to the unfortunates I shouldered past, going against the traffic flow to hurl myself over the legs of my seat mates and into the afore mentioned window seat. Whew. I needed to catch my breath. This occasion called for a beer, to celebrate and to contemplate the new order.

It seemed that once again my daughter had birthed a baby so quickly that I never knew about it until the whole thing was over. Alright, instead of helping with preparations, I would now be in charge of three year old big brother Micah while his parents were at the hospital with baby Francis.  But first, I got a chance to see my new angel, Francis James, named for Pope Francis and his paternal grandfather. There’s nothing so sweet in the whole wide world as a brand new baby.

A true instrument of peace

Don’t turn these two loose at the grocery store! 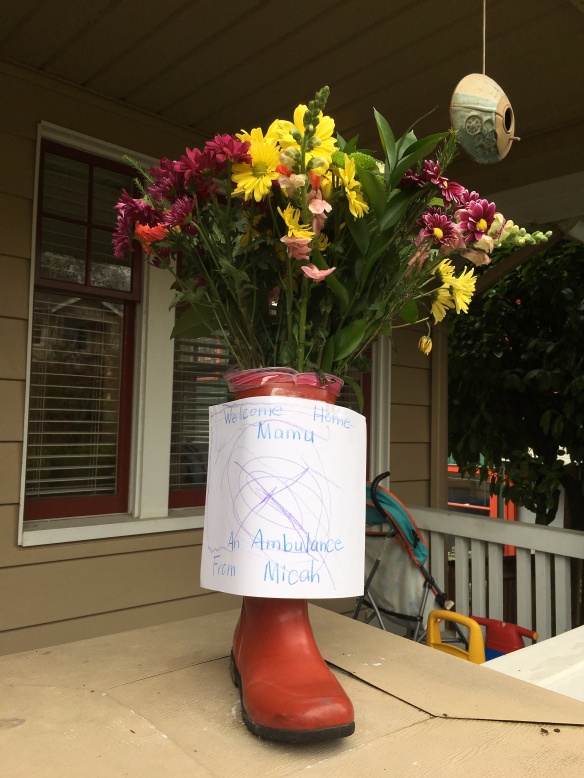 So the baby was home. All were well. There was wine in the house. But no knitting had been done.  However my  daughter snapped right back after delivery and was soon  a functioning human, a feeling I don’t recall having with a two day old baby and a toddler at home. 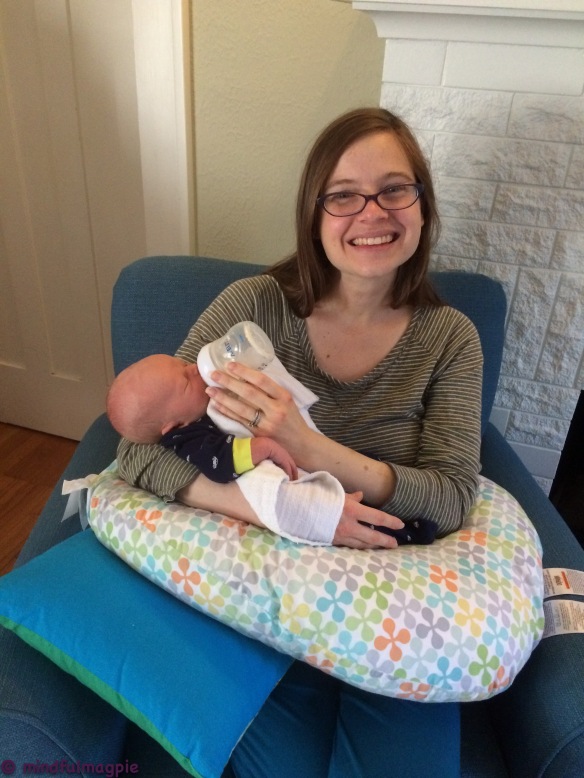 And my absolute prince of a son in law, well. He’s a prince. A double prince. A triple prince. 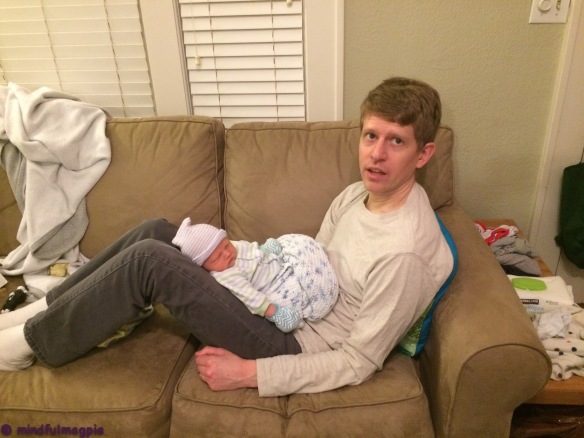 A prince who could use a little sleep.

It was easy to step into their well functioning team as a general dogsbody.

After a few days  it was so peaceful some afternoons

that I was able to collapse into a chair and knit for a few minutes. I knew it wouldn’t take much to just finish up….uh oh. How could it be that I would  have almost enough but not quite enough yarn to complete this project???? Could no one rid me of this tiresome blanket???

There was nothing for it. I would just have to walk around the block where providentially, there was a yarn store which shall not be named. Because I was leaving in a day or so. I announced that I would need to run this errand, but that I would be happy to take Micah with me. Cameron  preferred that he not go, as the shop was on a busy street.

What could go wrong with this boy on a busy street?

But when the young prince wanted to accompany me pushing an empty umbrella stroller, who was I to say no? We made it down their hill, around the corner and into the yarn shop in 90 seconds. Before I could say a word Micah had approached an innocent knitting student at a table  and yelled, “CAN? CAN? CAN YOU HELP US?” Without waiting for her reply he swerved his stroller down an adjacent aisle and began to recklessly case the place himself. A shocked collective gasp was heard around the shop. Had they never had an enthusiastic three year old customer before?

Micah was just like the proverbial train engine stuck in a railroad car made of magna tiles.

MAN did I get some fast customer service in that place! While I chased my grandson and his now yarn filled stroller, a saleslady directed me to some suitable yarn. I grabbed the first skein she picked up and said,”We’ll take it.”

After our purchase was complete I had to trouble the ladies further by asking to use their ladies” room. I won’t say anything else about this except that no one told me that the legs of a three year old’s porta potty must be firmly snapped into place before use. Otherwise the thing will collapse and cause mayhem necessitating a quick getaway from the yarn store.

Finally we were out on the sidewalk, our job complete. Now we only had to walk up a big hill and around the corner to get to our street. I couldn’t wait to get home. 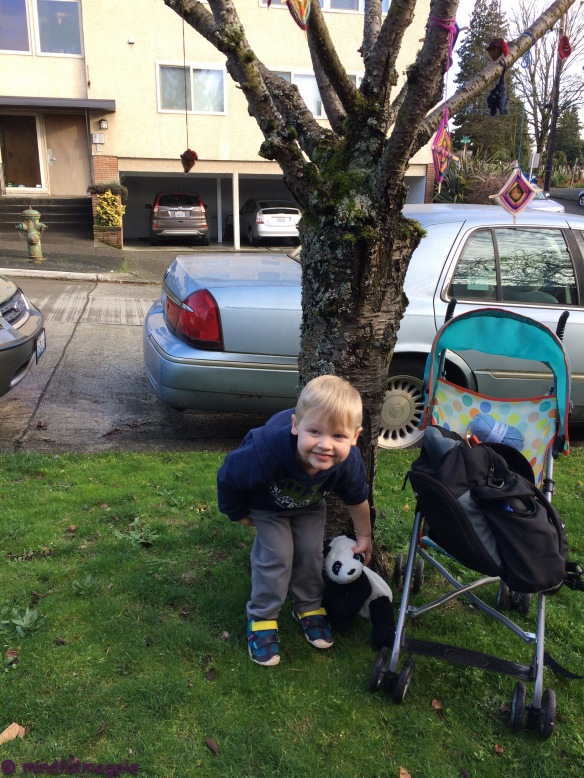 Do you see the yarn in the stroller?

Hot and sweaty, we climbed the hill.  At some point Micah sat in the stroller himself, and allowed the yarn to dangle over the side of the stroller and into the dirt. But what did I care? I was just going to use a bit of it to finish this ENDLESS project. Up the hill we trudged, around the corner, down the hill and up to the front porch, where I parked the stroller only to find I DID NOT HAVE THE YARN!!!!

Sigh. Do you feel sorry for me yet? So we went back out the way we came. I ran a little bit, and Micah informed me he liked to be the fastest one. He zoomed past me, which wasn’t very hard to do, up the hill, only to slide on a shady mossy spot and face plant on the sidewalk. Since I had now turned into a zombie it was hardly any trouble at all to carry the screaming child and his dirty teddy bear up the street just to verify that I could see the yarn nowhere.

I returned the quite heavy boy to his parents, and requested their car keys to drive my route in search of the yarn. I did not find it. I could easily have gone back to the yarn store except they hadn’t been that happy to see us in the first place, they may have figured out that a little accident had happened in their bathroom, and how was I going to admit I had lost a ball of yarn walking one block home? It would not do.

I went back to their home defeated. I didn’t care if I ever saw that incomplete blankie again. It had tortured me for months. It was now time for acceptance. One lost ball of yarn was not the end of the world.  And I had plenty of other pleasant ways to spend my time.

Early the next morning I was sitting in the living room when Eric and Micah burst through the front door. “Here’s your nutting!” cried Micah triumphantly. The pair had gone out that morning and searched for the yarn on foot, which I had been too exhausted to do the day before. And now, with the “nutting” found, the blanket was back on.

I started knitting with the new yarn which was not the same shade as the original yarn. I decided it made a nice contrast. But when it was time to leave the next day, the still incomplete blanket accompanied me home, wadded up in a plastic bag. But I knew we were almost at the finish line.

At home I had a few days to finish knitting and blocking the blanket before it was my husband’s turn to go out to meet the new baby and help. This time I made the deadline.

At long last the baby had his blanket, the little blanket that wouldn’t give up.  Francis has a blanket made by Mimi just like the others. To his knowledge he is Mimi’s only baby, which is just what all the others think.  Thanks for hanging in there, blankie. I hope you’ll be around for a lot more adventures as baby Francis grows.

Francis with his blankie.

And now I’ve got to go. I’m actually on a deadline with another so called easy to knit blanket for another small friend. To be continued…..