There she was, approaching my gate in the Atlanta airport, a stylish vision, decked out in a turquoise top, carrying a pumpkin colored purse, wearing red shoes and lugging a heavy purple carryon. She was on her way to Europe for the first time, and neutral was nowhere in her color scheme. One could say she was an exhibit of a colorful, exuberant traveler. Finally, after much planning and scheming, my sister Ellen was going to accompany me to Amsterdam.

Because my husband has business in Amsterdam, I have been fortunate enough to accompany him to that lovely city many times.

Typically we travel there on a Friday, arrive Saturday and have the weekend to explore before he goes to work Monday through Wednesday. I have never had any trouble amusing myself while he worked, but I often thought how wonderful it would be to show someone around the city, someone who would love it as much as I did. Someone like my sister.

We had no reservations about whether we would travel well together,  meaning we knew we would not interfere with one another’s reading, nor would either of suggest tacky tourist activities.  Ellen did later voice a secret fear that I might rush her through the museums, as I had been to them before. Although to me museums are there to be visited over and over again, I also secretly feared I might experience a feeling of let down if I did not also find something to do that was new to me. I decided to take my role as a tour guide one day at a time, and adjust our plans as needed so that we both felt satisfied.

And lo, with a sidekick to amuse me while my husband worked, all became new in Amsterdam. To my delight, every single place I took my sister had changed to some degree since last I went. What bliss  it was to spend my days with someone who “museums” the way I do. I would call my museum style slow and careful, yet humane, meaning that I read everything I want to read but I don’t overwhelm myself. I’m happy to immerse myself in exhibits and lose all track of time, but I’m not compulsive about seeing everything the museum may have on offer.

In five days we girls museumed ourselves through the Anne Frank House, The Dutch Resistance Museum, the Amsterdam Museum, The Church of Our Lord In The Attic, The Van Gogh Museum, The Stejdelik, and the Rijksmuseum.

The Rijksmuseum. Don’t even try to see it in one day. Even with the audio tour, you’ll get lost.

The Stedelijk had a lovely Matisse exhibit.

We were fortunate enough to avoid long lines at the Anne Frank House, as we went late in the day, after being the last people out of the Amsterdam Museum.

She took her time in the museum.

My fears of feeling bored or let down proved groundless, as did Ellen’s fears of being rushed. I was just as riveted by the exhibits as she was. Here we were, two ladies who try to live meaningful lives, reading about how others had spent theirs. Our daytime hours were spent touring carefully curated rooms, and our evenings were spent  gloriously debriefing. Over dinner we would pose question after question to one another about the city’s history and its development, for each of us is endlessly interested in the daily lives of others. Our questions really had no answers, but we just loved to share  ideas.

Deep, philosophical discussions after a day at the museums.

Of all we discussed what we kept coming back to was the value of self expression.  Again and again we had seen and read about examples of how ordinary people dealt with extraordinary conditions using what they could, never knowing how their works would one day inspire others. Some, wrote, some painted, some made needlework,some designed fashions, some composed music, but no matter the medium, they all used art to try to make meaning out of their lives. We marveled at how creativity was used to resist tyranny, to celebrate life, to save lives, or simply to endure. 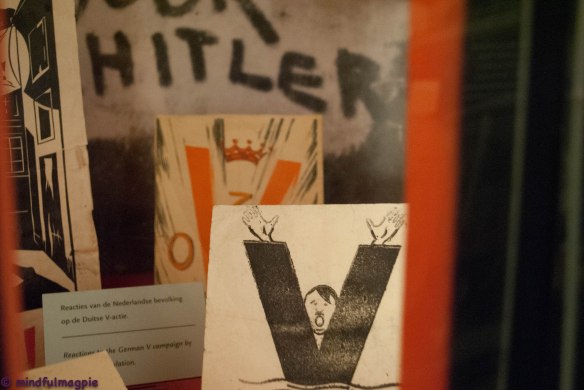 Protesting Hitler and The Third Reich

A journal of the Occupation

A church built in an attic…that’s creative! 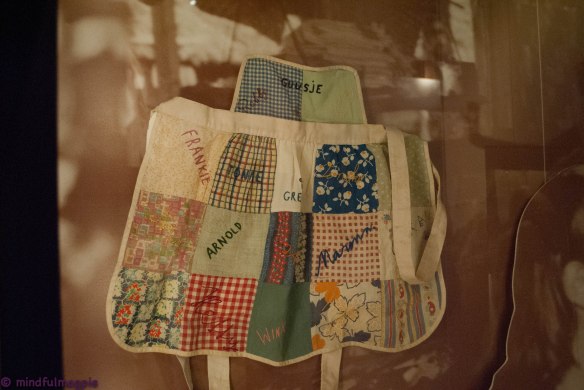 Sewing in an Indonesian prisoner of war camp.

And of course, Van Gogh had his struggles. 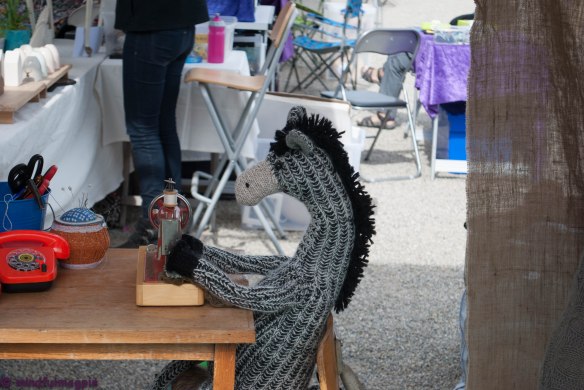 Most of us will never have articles from our lives on display behind a glass case at a museum, but what if we knew they were going to be? What creation of mine would I donate as representative of the way I have lived my life? What would I write on the little placard beside my exhibit about how writing this, or painting that, or capturing an image  with a camera helped me deal with problems unique to my time of life?

I am sure that my sister and I would qualify for some sort of nerd exhibit, in that we spent most of our waking hours poring over artifacts inside museums, while outside the most liberal city in the world was vibrating with life.

Plus, my sister was the only bare legged woman in Amsterdam, a museum worthy contribution.

But aren’t we all, as we make our way through life, cataloguing and curating our own little museums, filled with our own memories and hopefully, our creative efforts? In my own collection of life memories, I am so pleased to be able to add my experiences with my  sister, the colorful traveler, in Amsterdam, to see the city through her eyes, to revisit old haunts, and to enjoy being together.  Luckily, my museum is open at all hours, and I have a lifetime membership.