For some reason I was  in the dining room taking a quick swipe around the furniture with a dust rag. I approached  my grandmother’s étagère and began to carefully  pick up each figurine in order to dust the shelf beneath.  Some of the decorative pieces belonged to me, and some had belonged to my mother, grandmother, or great aunts. I wiped off each keepsake dutifully, wondering as I always did what was eventually going to happen to this repository of memories and holder of outdated pieces of ceramic. 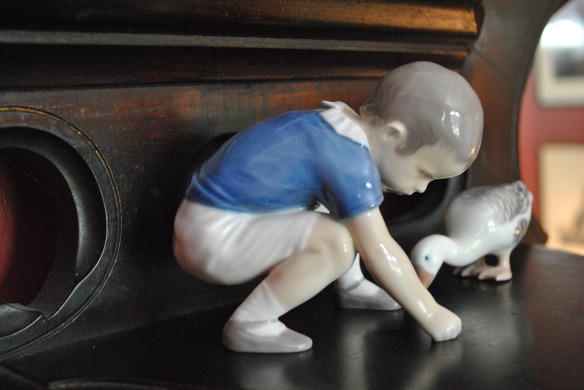 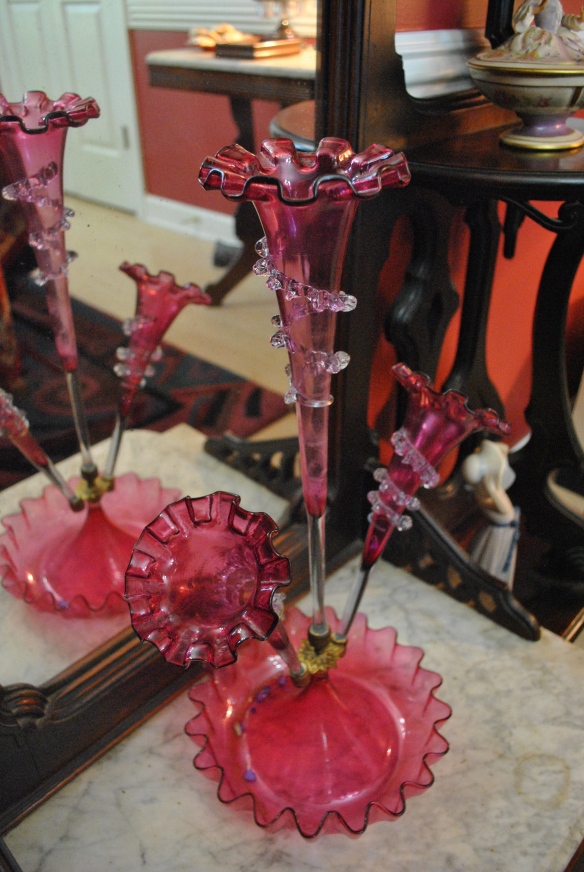 I don’t care too much for the figurines, but some gladiolas do look wonderful in Mama’s epergne.

I really didn’t want to keep all these Royal Doultons and Royal Copenhagens, much less the Lladros, but what was I going to do with them? I doubted my children would be interested in them.  And I didn’t see too much point in having the étagère either, except for sentimental value. Perhaps if I decorated in a  traditional style, the piece would be more prominently displayed in my home, rather than languishing in the rarely used dining room.

When I was a child the étagère loomed large in my grandmother’s living room, but as an adult I could see that the shelves were too narrow to satisfactorily display one’s treasures. What I had done when I inherited the piece was to try to rotate all the figurines so that they were all displayed at some point. My newer things did not look right on the shelves, so I rearranged the same old pieces, feeling like the clerk at a seldom visited antique store.As I worked at my  task, an unmistakeable voice wafted through the air behind me.

What? Startled, I forced myself to turn around slowly, so as not to drop a ceramic shepherd boy.  And there she was, in her housedress, with her glasses hanging around her neck on a chain.

“Mama! It’s so good to see you!” Quickly I set down my dust rag to envelop my tiny grandmother in a big hug. I insisted she sit down in a chair that once belonged to my Aunt May.

What’s my ta- zhear  doing over at your house?

Mama had always gotten right to the point.

“It’s mine now, Mama”. Pointing to the large piece made of some dark wood, I reminded her. “Don’t you remember it was your Mother’s, then yours, then my mother’s? And now I have it.” 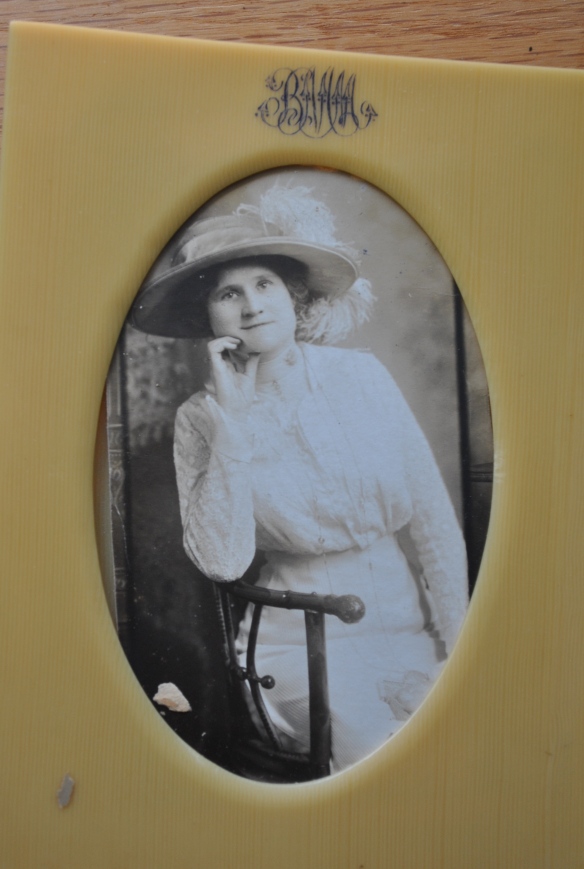 My great grandmother, Etta Blanche Miles Morarity, to my knowledge the original owner of the etagere. 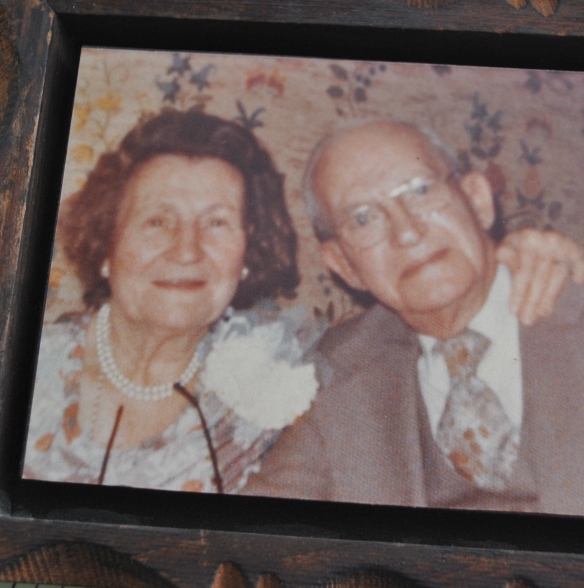 Well, I don’t want you grandchildren touching my ta- zhear.

“Yes, Mama, how could I forget? Those were the first words out of your mouth every time we walked in your front door. Plus I’m fifty seven years old now.”  And feeling a little snippy, I added, “Actually the piece is called an étagère”. 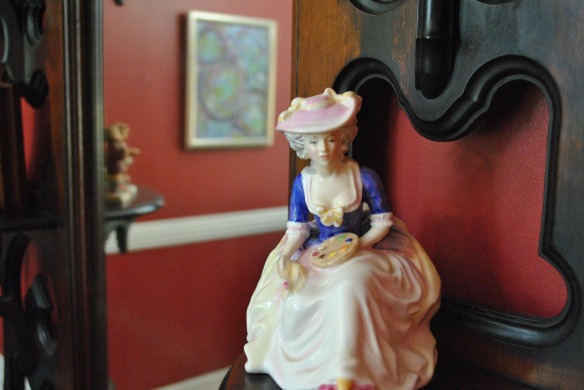 Here is a lady we were not allowed to touch. In the background is a painting that jus much more my style.

My Mama pronounced it ta- zhear. And where’s Bessie?

“My mother? Well, Mama I thought you would know. She died about six years ago. That’s why I have the ta- zhear.”

Oh, yes, I remember now. She’s usually over in the smoking section.

“She probably is, Mama, or avoiding you because you keep calling her Bessie instead of Elizabeth.” I was sure Mama must remember how vehemently my mother had always objected to being called Bessie. No one else but Mama dared to call her that.

I couldn’t  help looking over at the étagère shelf which held  the small  framed   photograph of Mama’a beloved sister in law, Bessie James, as a child. Bessie, who bears  a startling resemblance to my niece Alexis, died as a young woman after walking in front of an airplane propeller. 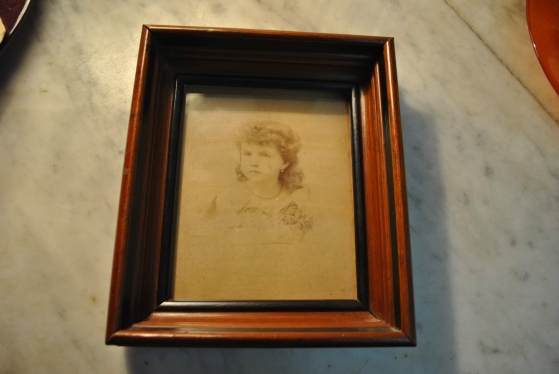 The original Bessie. The back of the photo says, “To my grandparents in Kingston Ontario from your little granddaughter Bessie James”.

Wanting to move to a happier subject I added, “I’m a grandmother myself now, Mama. I already have one precious grandson, and in a few months I’m going to have a second grandchild to love.” 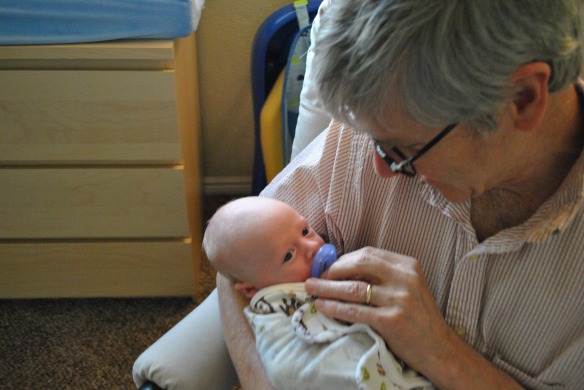 Mama chuckled. Yes, I heard about that up where I live.

“Yep, Mama, one of these days pretty soon  MY doorbell is going to ring, and when I open it, little people are going to race through MY front door, and what do you think MY first words will be to those little folks?”

Before Mama could say anything I answered my own question.

“Here’s what I’m going to say. Please  DO touch my ta- zhear! I’ve got some things on it that are just for you!”

I turned my back to Mama for just a moment so I could envision what I had just realized was the perfect use for  this venerable piece of furniture.

When I turned around, Mama’s chair was empty once again. Probably it was best for her not to see what I had done to her showpiece. 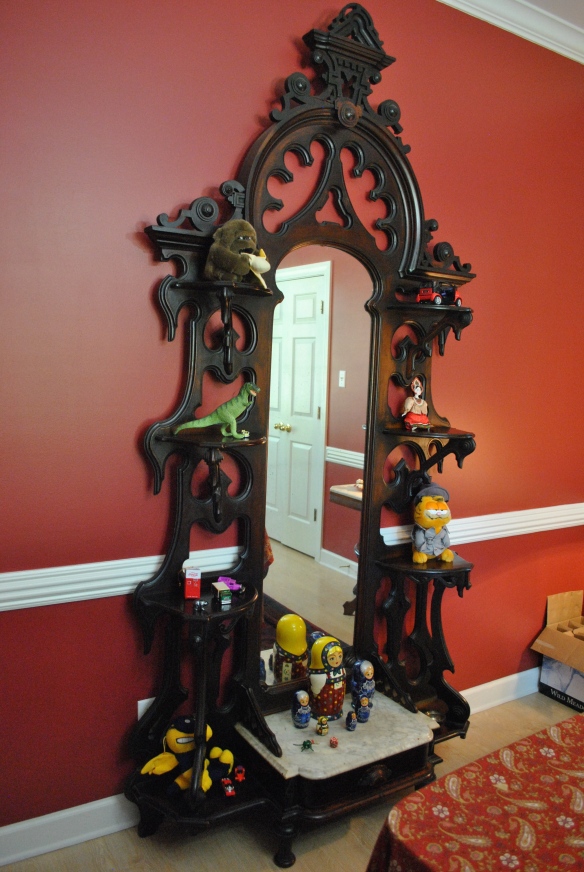 Of course I’ll have different things out when I know what each grandchild enjoys. These were just some toys I had handy. 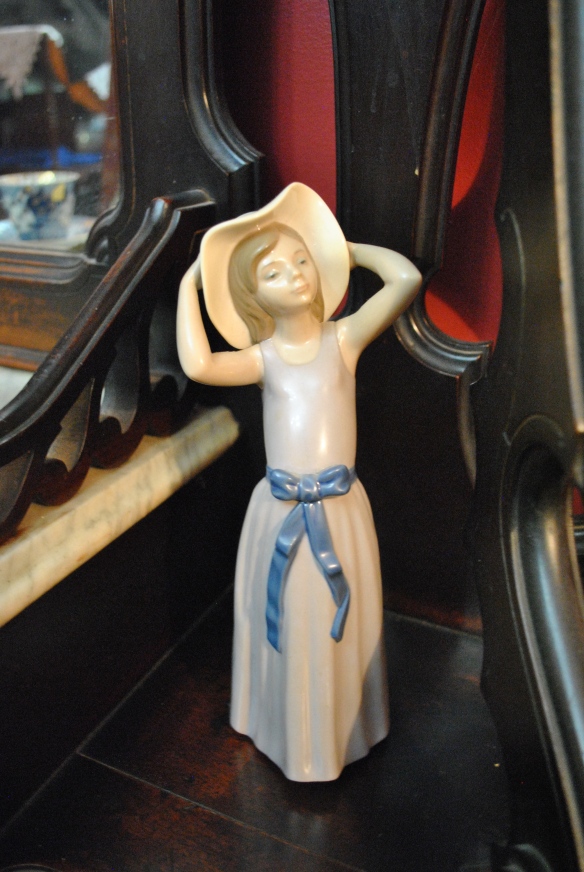 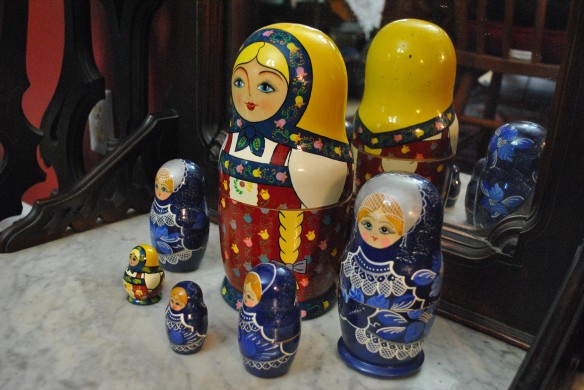 It’s important to cherish  the memories of those who have gone before us. We thrive on feeling connected to others down through the centuries. But there also comes a time to embrace what is new, to start  traditions that make sense today,which will hopefully be enjoyed and passed on to others. The ta-zhear is mine  now, so let the good times begin. You’re welcome to touch!