One of the perks of living to be 56 is that I’ve had time to collect a few people with whom I can completely be myself. Actually I’d like to think I’m completely myself whether I’m with someone or not, but with my comfortable people I truly appreciate the lack of pretense between us. I am “seasoned” enough now to be authentic, and to value that characteristic in others.

One of my authentic people is a friend I’ll call R. I’ve been thinking lately of some afternoons we’ve spent together in easy companionship. Our friendship has lasted through at least twenty years of graduate school, raising children, careers and career changes. We are vastly different yet love many of the same things. He is endlessly practical, yet hilarious at the same time. I’m sure I’ll say more about this in future posts, but he knows how to do EVERYTHING. EVERYTHING!

Anyway, I’m going to describe one of our recent  afternoons. R. doesn’t care for flowery or pretentious writing, so I’ll try to be straightforward, in  case he reads this. What am I saying? He’s my friend, so I’m sure he will read this!

One Sunday last November R. and I planned  to go to an estate sale in West Memphis, Arkansas.  We naturally got lost, and kept circling around the back of the Southland Greyhound Park while disagreeing about which way to go next. R. was driving and as is his wont, took us into a fairly sketchy neighborhood to ask for directions, whereupon, as we escaped without harm, found the estate sale. By then most things were picked over, so after we crossed back over the bridge we stopped at Tom Lee Park. 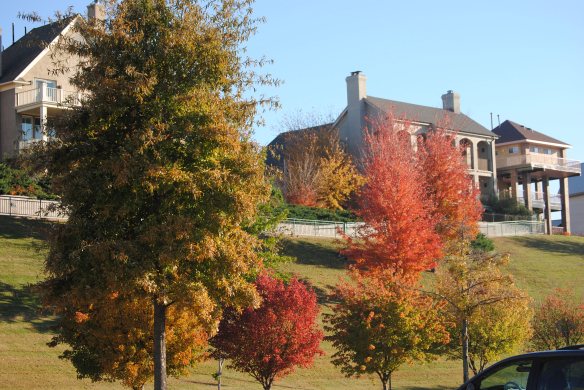 We explored up and down the river bluffs, pausing to watch  the boats on the river. 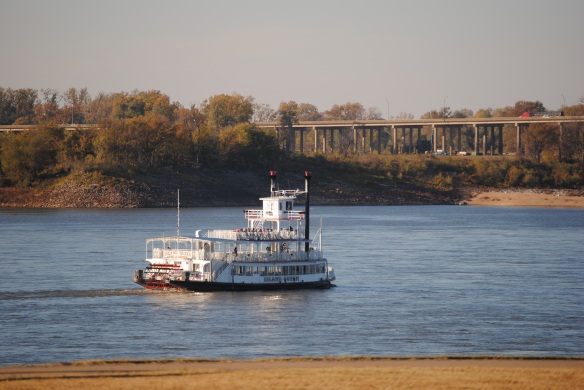 A tug was laying some sort of pipe in the river.

In a leisurely fashion we walked from Tom Lee Park to the end of the Beale Street Landing project, imagining what it would all be like when completed. 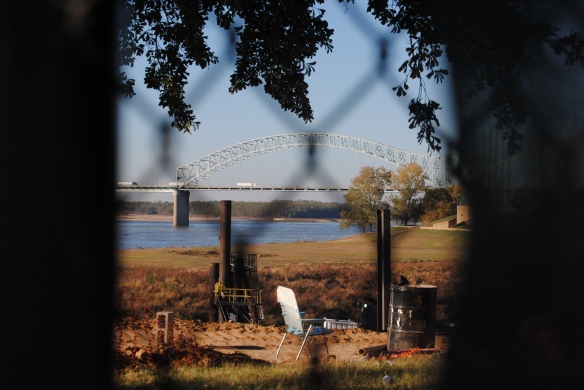 I suppose the crane isn’t really going to pick up the Pyramid?

A party had been held the night before in the partially finished building above. When the  building is complete, people will be able to see straight through the glass windows out to the River. 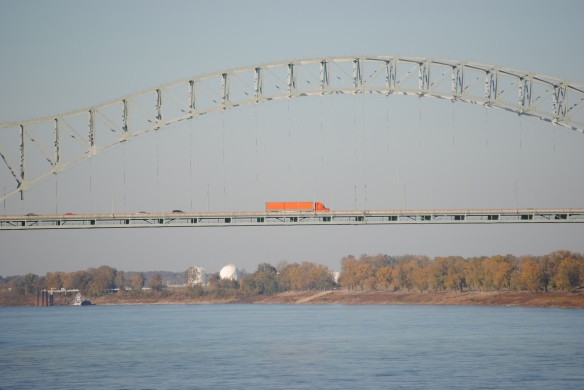 It was fun to be in no hurry, just to have fun watching the progress of this enormous undertaking  on the river. I pondered the passing of time. We were not far from where Tom Lee risked his life to save the passengers of a wrecked ship. Somewhere along this water my father as a young man  had a job as a fireman on a boat, and a little further down my grandfather worked at the Army Corps of Engineers.  A little further the other way, on the cobblestones, my Aunt Bessie sustained fatal injuries from the propeller of an airplane that was giving pleasure rides over the River in the 1930s.

I can’t go to the River without reflecting on the many lives that have been lived here before me. I would give anything to know all their stories, but my relatives are gone now, just as Tom Lee, the accident victims and so many others are gone. We live with our memories just as build for the future.

R. is not from here, but he has extensive knowledge of those who came before him. He also became pensive that day, mentioning that his mother was not doing well. This determined widow in her early 90s could no longer live alone in her rural home. R. and his ten siblings had made plans to care for her. R. did not say so but I knew he was doing his best to prepare for her eventual death.

Underneath the surface of the idyllic afternoon, I was uneasy for my friend. I worried that he may not be ready for all that could change in a family when a parent dies.  Reactions to loss differ among family members. Alliances can shift, and long held grudges can roil to the surface.  Of course, intellectually he did know things could change, having helped so many families with this as a social worker. But since both of my parents were already deceased, I had actually lived it. He had not.

I knew from experience how becoming an orphan, even at our age, is an unsettling experience. Suddenly there is no place to go back to.  Though we may not have been in the habit of going back, we suddenly realize we had always counted on having a place to return.  The house may still stand, but there’s no “there’ there. And of course, the un grasp-able ideas of our own old age and mortality mingle in with the sharpness of the loss.

Certainly he could no more be ready for any of this than any of the rest of us. No one can adequately prepare for the death of a parent. Though I wished I could protect him., I knew I couldn’t. Inevitably he  would go through what he would go through. I would stand by to listen, to be a reality check if necessary, and to assist in any other way I could.

I’m so glad I had that afternoon with him. Soon after he was called to see his Mother who had taken a turn for the worse. R. did not leave there for two months, until after she passed away. He, with some of his other siblings, took care of her around the clock, shirking no duties, for the rest of the days that she lived. Many adults would not be so brave as to be the front line caregiver for their dying parent.

The next time I saw R. he was in a new stage of life. We both had known that change was in the air that day at the River. Change is always in the air; we just don’t know when it will be. I think it has been said before me that part of the beauty of life is knowing it is all temporary. The impermanence of life is just why we all need friends like R., to enjoy silly times as well as sad ones, and to weather the days that come.