This is a short little story about the unexpected glories of aging. Between Christmas and the new year, I had the chance to get away for a few days. Usually my husband and I visit friends at their mountain cabin for New Year’s Eve, and on the way I sneak in a short but vital one night visit with my sister. When I found out our friends were not going to their cabin this year, my sister and I had to put our heads together quickly to be sure we got to see one another.

Because we just need to. That’s why.

While I was searching for a meeting spot somewhere between our two homes, my friend R. mentioned that he too wanted to have a short getaway, and so he made us a trio. My online search wasn’t yielding much. It seems people book ahead for holiday trips. When I don’t immediately find what I want on line I tend to look more and more and more until I am totally flustered. In this case, as a last resort I typed in “state parks close to Knoxville” instead of “TN state parks close to Knoxville” and VOILA! Up it came! Cumberland Falls State Park in Corbin, Kentucky. And guess what? They had just ONE available cabin, a two story, two bedroom, two bath with kitchen and fireplace. I’ll take it!!  I shouted into the phone. 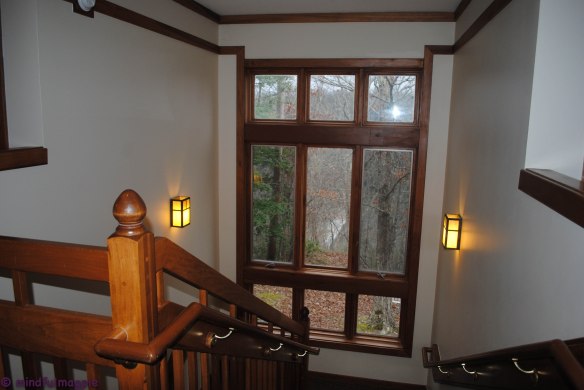 View from the stairs of the cabin.

When I left for Cumberland Falls on the 28th I had made few concrete plans, perhaps because by that time I had had  three house guests for eight days.  I just threw some clothes in a bag, grabbed a couple of bottles of wine and hit the road with my friend R. The easy six hour ride I envisioned did not take place, as it rained hard on us all the way to Nashville, all the way to Bowling Green, and all the rest of the way. I’m a cautious driver in the rain, and so did not use my cruise control one time.  We drove through the dark wet night, two tired travelers, one with a cramped right leg, until we saw the welcoming lights of the  the 1930s era DuPont Lodge.

Soon we were at the executive two story cabin, enjoying the spread prepared by Ellen, who had not been delayed by rain. We could not have been more thrilled to simply put on our pajamas, drink a glass of wine, and eat cheese and crackers. 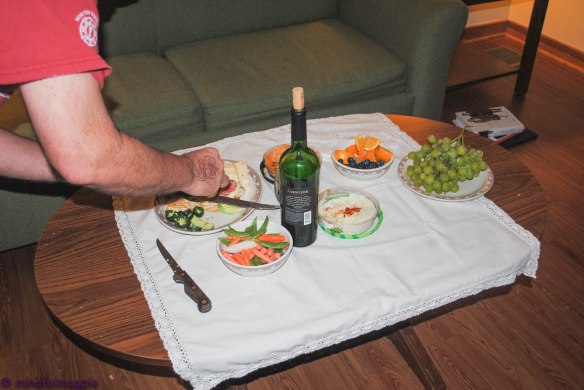 The little table cloth belonged to my mother, who knew how to make folks feel comfortable.

We found that each of us had brought little treats for the others. Ellen had brought adult coloring books. I had brought face cream and little facial kits, just in case, and R., a set of essential oils to share. No hikers ever smelled better.

In the morning we of course reconnoitered our surroundings by the light of day. Our cabins were situated on a ridge overlooking the Cumberland River.  About a fourth of a mile away was the Lodge, where we walked for a standard country breakfast.

After admiring the CCC  era lodge construction and lovely view from the restaurant windows, we made the important decisions of the day. To whit,  we would first walk whatever trails we could. Afterwards we would procure supplies, meaning wine. Ellen, who had approached the park from another direction, allowed as how she had passed the “Liquor King” on her way in. Third, we would build a fire with the firelogs we had purchased from the lodge. And finally, we would watch Transparent.

The weather was brisk but not too wet or too cold. And we three old folks set out for the woods.Let me tell you a little bit about the park. Known as “The Niagara Of The South”, the park is most famous for  its seven story waterfall on the Cumberland River. 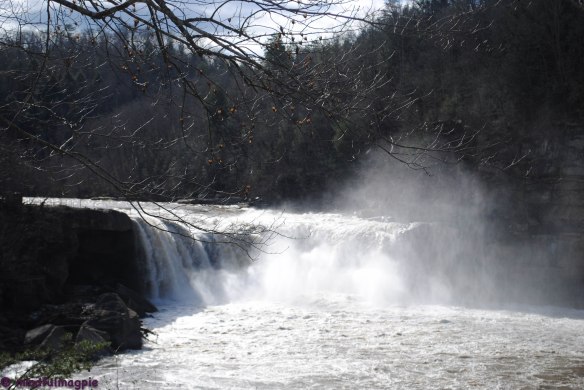 During full moons, a spectacular “moon bow” effect is seen on the water. We did not get to see that but enjoyed what we did see.

The trails are well marked and maintained. There are  camping, hiking, horseback riding and water activities available depending on the season. We were fortunate to be able to rent the very last cabin for our stay.

Just visible through the bars of the balcony is the warning that we are on a cliff.

The first day we chose what we thought would be a manageable trail. After we left the Visitor’s Center we saw few other people. Sometimes we talked, but often we were each silently contemplating our own lives, watching our feet trudge through the fallen leaves. Though the scenery would no doubt be more striking in one of the three other seasons, we still found numerous photo opportunities. 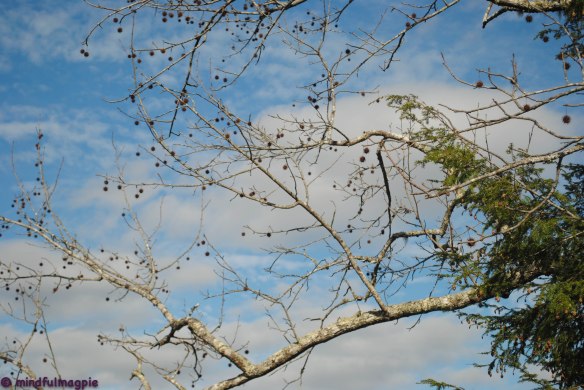 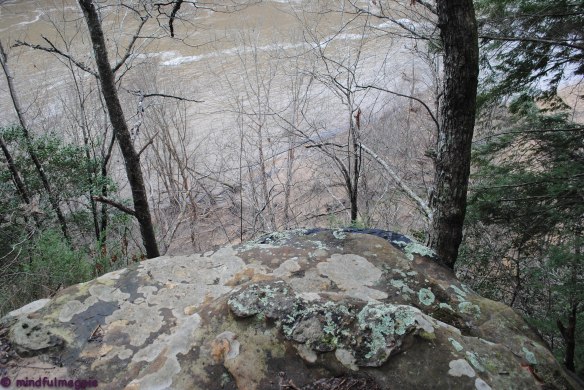 After several hours of hiking, or maybe it was only walking, we called it quits so that we could head into civilization. We had a good little drive before we pulled into Corbin. As I cruised down the main drag, Ellen kept a lookout for the “Liquor King” and sure enough there it was on the right. By the time we chose our wine and provisions we were eager to return to our cabin and build a fire.

Soon we were all in our pajama pants, reeking of soothing essential oils but ready to eat our cheese, hummus, fruit and cut veggies. We toasted to our collective health, for we had finished a somewhat arduous hike, which many folks our age cannot attempt. Our fire that night was not a success. Having no matches or extra kindling, we resorted to using toilet paper to stoke up the fire. Don’t even try it. 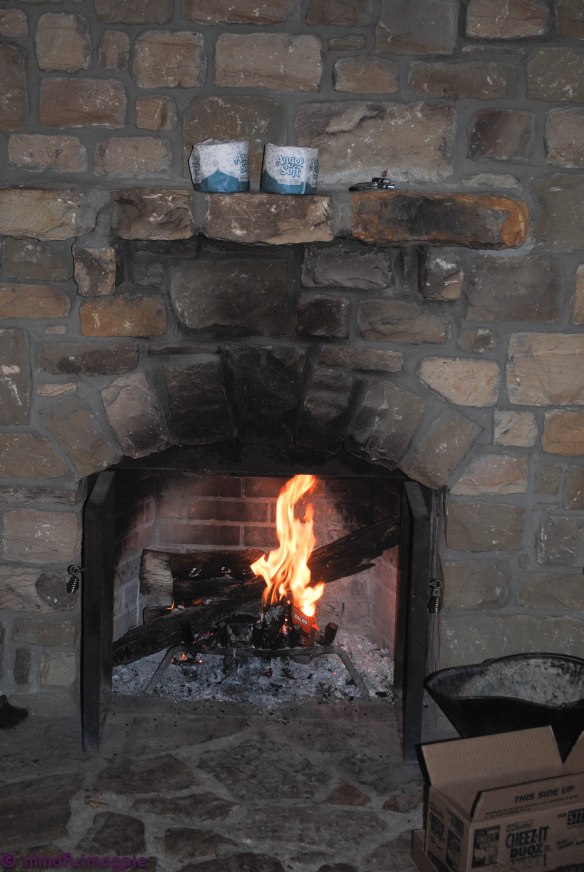 Do note the handy toilet paper.

Finally we were ready to start watching Transparent. I had already seen it, but my companions had not. After watching several episodes our commentary was hotter than the fire. The writing: genius, the acting: genius, the characters: self centered and extremely annoying. ( If you are not familiar with this award winning Amazon Prime series, it is about a man in his 60s who comes out as transgendered. But the show is also about the lingering effects of secrets in families.)

Perhaps it was the combination of the thinking time we had during the first day and whatever we were reading ( I was reading a biography of Winston’s Churchill’s wife, aptly named Clementine ) along  with watching the dysfunctional Pfefferman family that evening, that gave rise to our conversations the second day.

For a time we talked about what seemed important to each of us at the moment. R. was focused on the need to take pictures to record memories, not just for his family, but also for him. Ellen shared how she had, like me, been unable to take to scrapbooking. But we  all acknowledged that our memories had gotten somewhat tricky, and that we needed to make records of our time however we were able to do so. What was  the truth anyway, I wondered, writhing mentally, as I am wont to do,  at not being able to reconcile the various threads of the Churchill’s marriage.

Ellen, no doubt having grown tired of hearing about Clementine Churchill and the unfairness of it all,  mentioned some  tribulations of a family she knew. As tribulations go, they were of the kind that could happen to anyone.

Suddenly, the conversation changed from what happened to a certain family to what we know now that we are old. The three of us had entered a space where we did not have to censor ourselves for fear of upsetting someone else. Because by the time we  live past fifty, we have either lived through trying situations or known someone else who has. And we  can’t live through these things without coming out a little wiser at the end. We could admit our thoughts and conclusions now, for we were all past the stage of saying that these things could not or should not be so.

A family is no guarantee of happiness.

In fact sometimes you have to protect yourself from your family.

You may have to face an obstacle or situation that you thought only happened to others, not to you or yours. In fact you will certainly have to do this.

Some things don’t end. They are managed. But they don’t go away.

Dreams are not for some future date, but for today, for we are not guaranteed tomorrow.

This may sound depressing, but it was a moment of refreshing honesty. No one tells you these things. You must learn them for yourself. It felt good to know we had all paid our dues.

As we sat at the breakfast table, we felt the comfort of being old together, of knowing that we had all learned hard life lessons, and that we could openly say so.

After breakfast just as we had done the day before, we struck out for the woods, stopping to admire carved out boulders, caves, and waterfalls.

We had gotten a late start because of our leisurely breakfast.

View from the back verandah of the Lodge.

Ellen was in a happier mood because that day she had actually remembered to wear her new hiking shoes. It seems some parts of growing are not profound, only silly.

We passed through some muddy spots close to the river, where we each had to navigate in our own way to get to dry land.

Once, R. who was in the lead at that time, lost his footing on a  slippery slope, unable to gain purchase on anything, and landed on his posterior at the bottom of a hill. Ellen was in front of me, and reached him first. I heard her ask if he was alright,  and he said he was. Then she asked, “Was it a soft landing?” 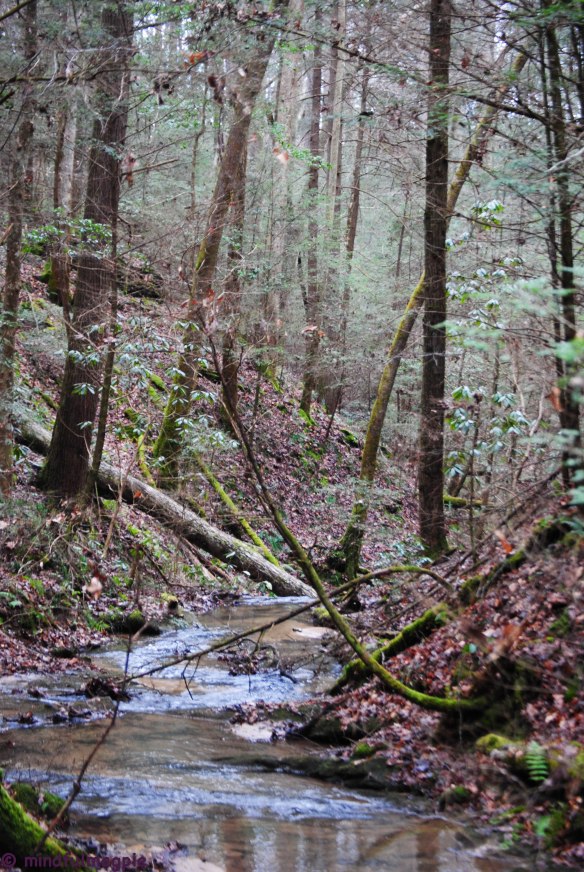 That phrase has stuck with me. Soft landings. I think that is what we were all trying to say at breakfast. There are sadnesses and disappointments in life, in ways we never could have expected, but when we accept that these things are bound to happen, there is peace. Because there are sadnesses and disappointments, we decide give up on certain dreams and grieve our losses. In the process we learn to cherish the very simple but meaningful aspects of our lives: smiles, memories, small acts of service, being present for others. We find we can thrive on these. Productive lives have been made of less.

When I was younger I struggled like anyone else, but without the knowledge that comes from experience, the knowledge that tells me that in the end I will find peace, increased awareness, humility,  or just an enhanced ability to appreciate daily life.

In the woods, we three old folks were making our respective ways the best we could. In the end we chose a shorter route back to where we had begun, for the sun was setting faster than we expected.  Sometimes we became winded and longed to be back at the cabin. I found myself daydreaming of taking a piping hot bath upon my return. R. was no doubt wondering about his muddy pants, as he had brought only one pair. But even as we hiked the steep paths, we knew we could look forward to another cozy evening of sitting in front of a fire, warm in our pajamas. We were confident of  providing ourselves  a soft landing.

May you all find soft landings in the year ahead.