Many women, and I am sure some men,  belong to a book club these days. Like all  groups, book clubs develop their own social norms. In some groups there is no overt or covert censure for not reading the book you agreed to read for the evening.  Meanwhile, members of  other clubs may send a invisible chill across to the room to that unlucky  woman who announces once again she hasn’t gotten around to reading the story. Some groups even have  compulsory attendance rules. Yikes.

Now MY Book Club, since you want to know,  falls into the very- few -rules- category. Members take turns hosting, and the selection of books seems to happen by some unseen democratic  process. I am not an original member of the group, so I don’t know if they ever said things in the beginning such as , “Let us  read books of literary merit. Or at least no insultingly bad best sellers.” But I am grateful that no one in the group ever suggests reading some type of annoying treacle. Because I wouldn’t want to burst out in some unflattering pronouncement if someone were to make such a suggestion. And though we try to respect one another’s book suggestions, my ardent bibliophilia requires me to maintain some standards.

So of course we discuss the book of the evening, and compare one another’s responses to the characters, plots, and prose. Spirited debate takes place over whether character A actually had an ulterior motive when he undertook Action B. When one member announces she couldn’t put a particular book down, another will declare she found the characters in the very same book completely boring.  We are all equals in the realm of book discussion. No member is admired more, or less,  because of her reading habits.

But  if you want to locate  the Queen of The Book Club, go where the food is.  Because good food is one of the top reasons to have a book club.  Wine is another.  Listen to the talk in the dining room.  What talented, genius woman baked  that warm crusty bread, oozing with melted butter? Who conjured the Indian vegetables sizzling with tumeric and roasted cumin seeds? Who churned  the homemade mango ice cream?  For SHE is the Queen of the Book Club for the evening.

The Queen’s subjects identify themselves by their adoring glances at their plates, their raised eyebrows and bugged- out eyes, and their enthusiastic expressions of gustatory pleasure. Mmmm! MMmmm!! MMMMM!!! Oh.  Chew.  OH!! Yes! I’ll have what she’s having! The subjects approach the Queen with supplications to release her recipe and the its provenance, a request to  which she complies with appropriate grace and ceremony, as befits a royal. The Queen declares her dish was something easy to do, and that the other members can also achieve the same results.  Recipes will be emailed forthwith. She doesn’t preen, but appreciates each and every subject.

The higher culinary standards of the group have challenged me to look for dishes to bring which at least to me seem  more novel – ha- than the average fare. I have at times felt the warm glow that comes from assuming the Crown for the evening, when  I ran across a new recipe on a blog, and decided to give it a try.

Have YOU ever been the Queen of The Book Club? If so, what dish did you make? For those who  have not yet been the Queen, I am  from time to time going to share some recipes I have made which catapulted me into royalty. Because I think everyone deserves to be a Queen, if only for the evening.

Today’s selection is Very Green Tahini Dip. I saw this recipe on Tasting Table and was intruiged by the combination of ingredients.

DIRECTIONS1. Wash the greens in cold water and transfer to a large skillet with the water clinging to the leaves. Set the skillet over medium heat and cook, stirring often, until the greens are wilted, 3 to 4 minutes.2. In a food processor, add the wilted greens, avocado, tahini, lemon juice, parsley, cumin, and salt and pepper to taste. Process with 2 tablespoons of water to yield a medium-thick consistency (add up to 2 more tablespoons of water if needed). Serve with crudités, pita chips or fresh pita. Calories Per Serving: 108; Sodium: 161 mg; Total Carbohydrate: 6 g; Fiber: 3 g; Fat: 9 g

I thought the 1.5 cup yield sounded as though it could be skimpy so I was generous with my arugula.

Fine so far. The my scooped out my avocados. 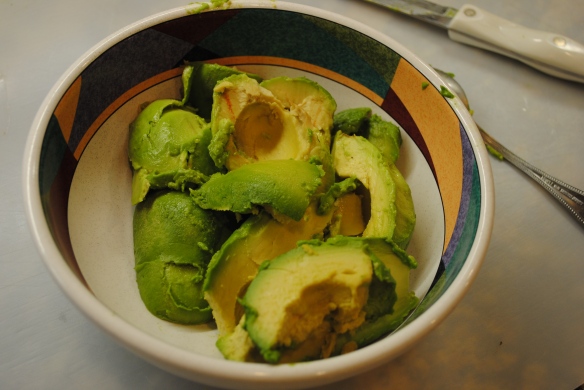 I  think this is about where I found that I had indeed thrown out that drippy looking jar of tahini I used to have in the refrigerator for all that time. But I had sesame seeds so I could just make my own. A little tapping on the computer and I had my recipe for tahini from a blog called Cinnamon Spice and Everything Nice :

But did I have an entire cup of sesame seeds? I did not!  Was my kingdom at stake? I threw in a few pumpkin seeds with the sesames  and hoped for the best. 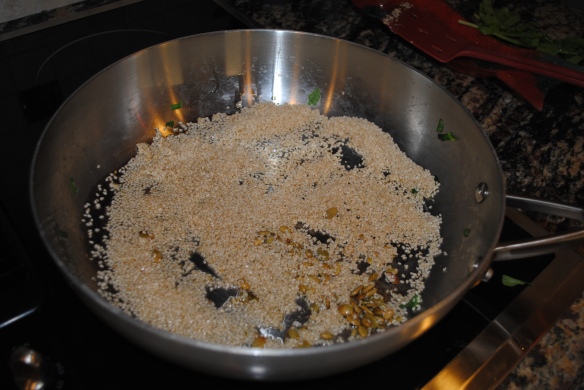 They pureed nicely, so crisis averted , but I think when I buy the enormous bag of sesame seeds I plan to get I will make my own tahini ahead of time. 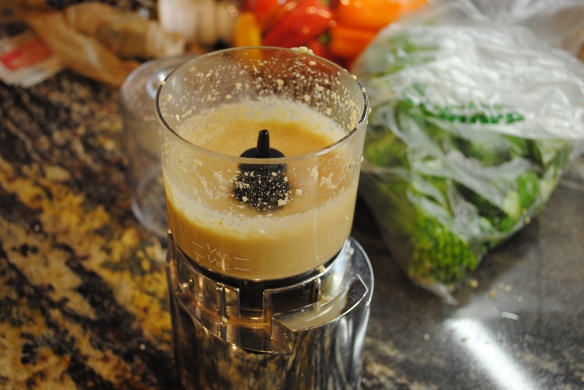 Then I got kind of hypnotized watching the ingredients pulsing in the food processor. It was getting close to time to go so I forced myself to put the dip in a bowl. About that time two eminent food critics – my son and one of his friends – walked into the kitchen. My son wrinkled his nose a little  because I had  failed, inexplicably to him, to make a meat dish for him to taste. But taste they both did. Once, then twice, then once more, until I had to say, “Uh guys, I’m taking this somewhere right now.” 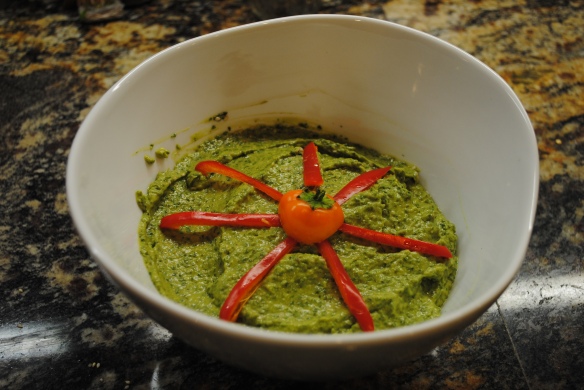 If you love arugula as I do you will love the nice bite it gives. If not, spinach will work. I served this at the book club with small sweet peppers but chips could be used.  And folks, it was a winner. It was green, vegan, snappy, and delicious. And I smiled benevolently  at all in the dining room,  for I was Queen of all I surveyed.