Hey everybody! I’m on my way out to the pool, but before I go, I know you want to hear about the  Friends Of The Library Used Book Sale. Because although everyone does not get to go, everyone SHOULD have the chance to go. Yes, I wrote about this last year. It was a popular post, but I know better than to try to recreate it.

I know you would have loved being there. I arrived at 10:00 A.M., accidentally grouping myself with the crowd waiting to be the first ones in. We streamed in when the doors were unlocked: the young, the old, the limping, the pony tailed, the bearded. Many thought to bring their own bags, for a bagful of books was priced at five dollars. And we early birds each had a game plan.

Mine was to head straight to the record albums. I did find a few, not as many as I had hoped, but I had to move on. Now I was free to drink in the heady air of the shelves. Nonfiction first. I already had a rolling cart, because as the pro that I am, I was not going to be held back by a handbag, despite its potential value as a weapon to procure the only copy of  Backyard Pests or Desserts From Around The World. 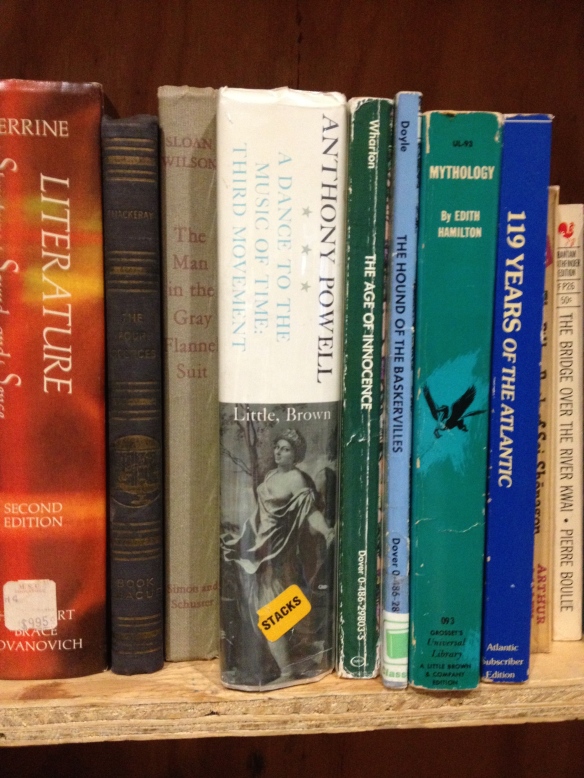 I would willingly fight for this Anthony Powell, but I already own it.

I found paperbacks to read in the swimming pool: 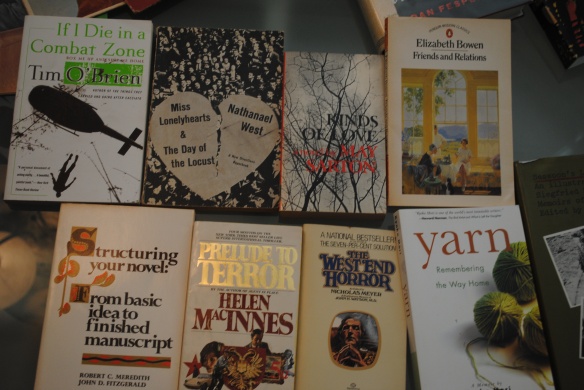 And some nonfiction that suited my fancy. 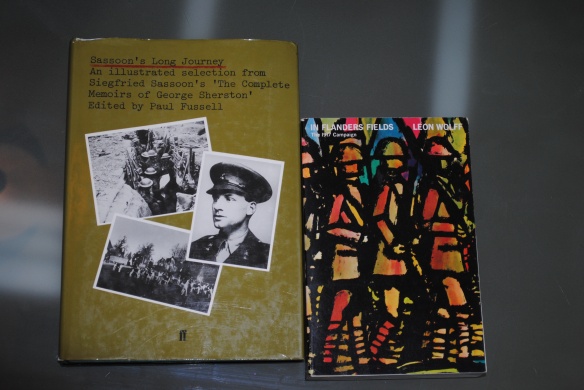 Though we were  a civilized crowd today, emotions ran a broad gamut. Would there be any decent classics left? And how about the selection of banned books? Endorphins and cortisol filled the room like a whiff of Midnight In Paris.

Hey. Scoot over and make room for somebody else.

Tension was definitely in the air, but if one wanted to be sure, one could do what I did. I eavesdropped. Here is my report of the emotional scene:

Disappointment in the  the paperback fiction: “I been lookin’. But I ain’t found the first romance in here.”

Effusiveness, obsessiveness and  poor boundaries in the mystery paperbacks: “I’m a neat freak! Everbody wants to know how I keep my house so clean!”

I don’t see the lady in question. She had clearly come straight from having her hair done.

More obsessiveness  later from the same woman, apparently worried abut the effects of unauthorized reading on the populace, in the hardbacks: “Yes, but when you get started on one it really ruins your housekeeping, doesn’t it?”

Attitude of entitlement in the children’s section, from a middle aged woman, imperiously, to a volunteer,”Where are the third grade books?”

Affability and non competitiveness, or perhaps a pickup line  in the hardback fiction, from a man to a woman, Him: “I’ve seen quite a few Danielle Steeles in here. Aren’t you looking for those?”

Defeat, from the woman with a limp, to her friend in the science fiction, “Just take yer time, Charlene.  I’ve gotta take a load off.”

I feel her pain.

Hope, from one woman to her husband, over in the corner ” Let’s pay for what we’ve got and come back at 3:00.”

Determination, in the History section, from a little girl to her Mama, “Please just let me finish this row!” Mother agrees reluctantly. Girl finishes searching the row and grabs a book.

Mother,”Young lady, you have already got a set of Presidential biographies at home. You can’t find what you want so you just want to buy something.”

History girl is the one in pink. Is it so wrong to just want to buy something?

Generosity, from a man to his wife in the record department, “Honey, go ahead and get it. It’s got Cher on it!”

And from me, ambition to become one of the helpers at the sale. and not entirely for altruistic reasons. Me, to my husband, as we exited the parking lot, “I know that record volunteer was holding some records back. I saw him.”

8 thoughts on “Overheard At The Book Sale”