Today’s post is inspired by this bloghop prompt: Write about your earliest memories.

Emily at the waiting spends all the livelong day in tasks large and small relating to the health and wellbeing of her precious tot Cee. One day, when Cee is an accomplished young lady, will she remember the times when her Mama cut her peanut butter and jelly sandwiches just so, the days when Cee climbed the slide and went down over and over, or any of the other daily routines that once made up her teeny tiny world? It would seem only fitting that the child be able to recall something of those most important years during which Emily will have worked harder than she has ever worked before.

In her blog hop prompt Emily referred to the term “childhood amnesia”, meaning  the inability of many adults to access early memories. I don’t really like that term. To me it sounds as though someone took our  babies over to some Scientology place and vacuumed out their  brains. Whatever this amnesia may be, do  mothers really need one more unfair situation to contend with, after all the parenting challenges  we already face?

It seems as though   mothers  are saddled with the knowledge that although we guide our  children through every single day of their formative years, that most of that fun and laughter will live on only in our own minds. In the end, some number of former children will just have to take our word that their younger days were filled with all the magic we grownups were  able to summon. But take heart, mothers; not every child reaches maturity with no remembrances of their younger days. Take me, for example.

From the time of my birth until the time I was and two and a half, I lived with my parents and older brother in a small house in East Memphis. It was my parents’ first house. In a marriage typical of the 1950s, my father went to work each day in the only car while my mother kept the house and the children. In the afternoons we napped  and our mother  polished our white leather shoes and bleached the shoestrings a pristine white. I don’t remember my father at that house, but that is not a criticism; I believe that like many fathers of his day, he left the hands- on work of parenting to my mother.

My memories from that house come to me in snippets. They don’t make a complete narrative, but here they are, in no particular order:  My Mother had  beautiful, intriguing hat boxes in her bedroom. Inside each box was a delightful, colorful array of feathers and textures. I don’t know if I knew they were hats.  I coveted them but they were off limits to me. I recall seeing the large figure of our maid, Lucinda, blocking my way to the desired stack of round boxes. Our house was on a small hill that seemed giant from my viewpoint.The thought of traversing the hill filled me with terror.  How would my short legs get me up or down that steep driveway? I remember lying on the floor in the morning,  giggling  in the galley kitchen while my mother pretended she didn’t see me. “What’s that on the floor?” she asked as she poked me gently with her bare foot which was attached to a slender, shapely leg. 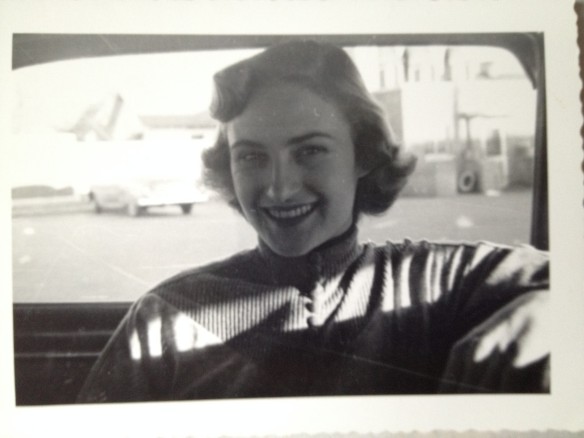 In the afternoons my mother would close the  brown wooden shutters in the combination living room and dining room to signal that it was nap time. I would watch as with each closing louver the sun went out in the room.I didn’t mind seeing the sunlight fade, but I did mind the idea of a nap. Finally, I recall sitting perched  on  our living room  couch that was piled so high with things that there was barely room for me,  listening to a recording of “The Bear Went Over the Mountain”. I  believe that was the day we were moving to our new house.

This I do not recall!

For each of these vignettes I have a corresponding feeling of “rightness” in my body, a knowing that I was there. Here are other facts  that I have been told but do not remember: that my brother and I rose early one morning, leaving a trail of bread crumbs for my mother to find us, and she followed them, locating us  us around the block on someone else’s swing set. That must have been my brother’s idea. Another of his ideas was to wash my hair with Elmer’s glue. My mother told  me we played out in the backyard every morning, and that each  afternoon all the mothers and children gathered to play in someone’s  fenced back yard, but I  don’t remember that either. I wish I could.

Now there is no one alive to verify or add to those early experiences, unless my brother remembers things I don’t.  I am left with only my memories  and my own truth to connect me to the time in my life when I was learning to navigate the world and myself.  My memories are few, but the way they resonate in my body tells me  I was the center of my parents’ world. That awareness seems to me to be the most sustaining memory  of all.

I take such comfort in being  able to remember even a little from  such an innocent time of life when my parents were so young and vibrant. They were still in their 20s, and they thought they had the world by the tail. It was the height of my parents’ physical and emotional intimacy with me. My parents were fallible, but I had no knowledge of that as yet.  I’m not sure if they knew it yet either. It was not until later that I would see their imperfections and learn the important life lessons of acceptance and cooperation.

No one grows to adulthood without some wounds or disappointments. Though as parents we know this intellectually, we hope life will be smooth for our children. We do all we can to pave the way, and tend to let go only reluctantly, often only after our fingers have been forcefully removed from whatever corner of control we believed we had. Maybe it’s not fair, but that’s the way it is.

For those of us who have become parents and devoted our best efforts to our children, perhaps we can console ourselves with the idea that later in their lives, our children might retain some grain of remembrance of what to us was our most significant life’s achievement. If they can only remember one Christmas tree, one trip to the zoo or one sunny afternoon in the front yard, we hope that it contains the knowledge that they were loved and cherished beyond compare. And for those who have no specific recollections, let us hope that all of our hard work has crystallized inside our children’s beings as a preverbal sense that trustworthy adults were on the scene when they were needed the most. If our children can internalize, consciously or unconsciously, the love laced into each daily interaction, no matter how mundane,  we  can rest assured we will live on in their hearts.