And without further ado, the conclusion of the two part series “Calendars”, brought to us by a very special guest author!

Having literally been at the mountaintop with my Montreat calendar, I wondered what I could attempt for an encore. I knew better than to just pick some more pictures from my BRP/Montreat trip, as going down that path with my second year of Keukenhof photos was less than satisfying. Plus, you only get one chance at making a first impression and any other Montreat calendar I did would just be compared to last year’s calendar. I needed a new idea but didn’t know where to turn. Interestingly, my inspiration came from my adult daughter who for better or worse shares many of my own qualities (or flaws as my wife would say).

For over a year, I had been following my daughter’s photo blog on flickr, where she posted a daily capturing of a photo and a thought to go with it. I had thoroughly enjoyed this connection and insight into her daily life even though she was almost two thousand miles from her childhood home. I thought what a wonderful reminder she would have of each day when she looked back on these posts years from now. How could I make this idea work for a calendar?

Getting 30 pictures on a single calendar page would be next to impossible and would certainly lose impact due to their small size, but surely I could capture one or two photos from each month to feature. And 2011 had been quite an eventful year to boot as our oldest son and daughter each got married and our daughter and future son-in-law got their PhD degrees. But as anyone knows, coming up with an action plan after the year is over is doomed for failure. My belated plan was no exception to that rule. In looking back over my year of photos that December (which is easy since I create digital folders by calendar year for them on my computer), I realized some months I hadn’t even taken a photo.

So my first retrospective calendar included many months with spectacular events featured but also a few months where a photo was “borrowed” from another month. Call it cheating or creative license.

Despite my poor planning in the previous year, every month of 2012, I enjoyed seeing that calendar hung on the side of the refrigerator. Some times I would go by just to glance at it, not even needing to check a date, just to relive the moment.

Now the 2012 calendar has just been taken down and replaced with my first real time engineered 2013 calendar. What joy it was upon its arrival to flip through each month and see what memories I would be reflecting on throughout 2013. As intended, each month of this latest calendar includes one or more significant event photos taken in that month in 2012. The spectrum ranges from something as exciting as a raging river through the mountains of Canada as seen from a scenic train ride to a peaceful foggy fall morning on the lake in our neighborhood captured as I glanced over on my way home from the gym.

Part of the fun is picking the best or most significant shot at the end of the year for the cover. This year’s cover was an easy guess.

The arrival of that latest calendar must have been swirling in my mind while I slept since I woke up one morning motivated to write all of this down. When I sat down to write, my first thought was “I love calendars” and I thought, “That sounds crazy: you’re a scientist; that doesn’t even make sense.” But after writing this I understand even as a fact-based scientist, that the idea makes perfect sense. It’s the emotional chemistry that can’t necessarily be analyzed in the laboratory. It’s always there, invisible but underpinning us and we just have to make sure we don’t ignore it, but live it because it adds such richness to our lives and experiences.

I also have started my 2014 calendar. Thanks to a year-end trip that spilled over to the New Year and family home for the holidays, I already have two pictures for January 2014. Maybe I will hit that 30 this year.

And one last crazy thought: I think I still have every one of these old calendars. A collection that started in my youth with a simple love for Montreat and the Smoky Mountains is now tucked away in boxes or drawers, hidden treasures waiting to be rediscovered. 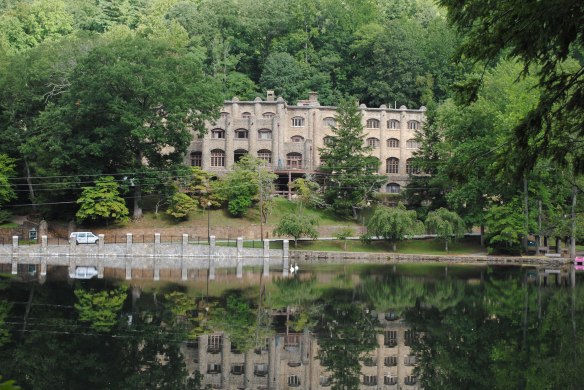 Having lived and enjoyed a year with a calendar, it just has never seemed right to throw it away. On more than one occasion, I even thought I would cut one of the photos from the calendar and frame it although I never have. I guess that’s the practical side of me, not wanting to try to figure out how to fix a photo with a hang hole at the top of it. Maybe a benefit of enduring the “you never throw anything away” comments all these years is that these calendars can be unearthed. Now where should I look first…