Honey, I’m home!  I’ve escaped to the mountains with my sister  and returned to eerily decent weather, with  temperatures in the 60s in the mornings, and highs in the 80s, with breezes and no humidity. With this weather I could just about stand to live here! I know you are all eager to get my mountain report but today I’m going back to the beginning of the summer , to the last place where I felt such pleasant temeperatures: Vancouver.

Actually it was  cooler  in Vancouver than it is here now, but  the coolness was a welcome treat for me. Looking back  at the pictures it is hard to believe that only a few months ago I was someplace where I couldn’t walk down the street without a scarf wrapped around my neck. If someone tried that fashion trick around here they would be asked by old ladies in kindly voices, “Honey, did you hurt your neck?” Anyway, time for a look at Day Two in Vancouver!

Goals for Day Two in Vancouver were simple. Hit the Granville Island Farmers Market early, when it would be less crowded, followed by the Museum of Vancouver, to get a feel for the history of the city. From our location in Davies Village it was a short downhill walk to the place where we could catch a a little tug boat to Granville Island. These tugs come every twenty minutes, so we bought an all day ticket so we could come and go as we pleased.

Oops! We didn’t realize  that Granville Island was the location of The International Children’s Festival, and that very Sunday was the grand finale!   We  gamely toured the covered parts of the market, wending our way through the crowds, and admiring goodies as we had hoped.

Don’t even try to mess with her.

But the density of people was much worse outside. We quickly found we would need to scratch the relaxing plan and go with the survival plan. Apparently people can drive their cars to Granville Island, so everywhere we turned we were dodging Volvos crowded with kiddies either coming or going from the festivities. I  wonder if some of those poor people are still bumper to bumper on the Island, circling until they find a parking place?

All around us were face painters, organ grinding music, kiddie performances  and the like. Surely this is a worthwhile event, but what were we doing here? After looking unsuccessfully for a peaceful sanctuary, we came upon a helpful maintenance man, perhaps fleeing himself, who pointed out a hotel at the end of the island where we might find respite. We made a dash for the Dockside Restaurant  and were grateful to be seated on an outdoor patio, facing  the opposite  direction of the festival.

We hadn’t planned on a brunch, but the salmon burger was delicious, and the live jazz soon made us forget the cacophony at the other end of the island.

Yes. These people are covering themselves with blankets.

Next we got back onboard the tug to head for the Museum of Vancouver. Aah! We virtually had the place to ourselves.  A word about Vancouver museums: there aren’t very many. Unlike other large cities, Vancouver seems to be young in its  municipal museum life.

This cozy little museum has some permanent exhibits about life in the area since white settlers came in, up to the present day. ( There is another museum that tells the story of the   indigenous tribes.)The town that became Vancouver grew very quickly after  it was named to be the final stop on the Canadian Pacific Railway in 1884.  Many ethnic minorities came in to help build the town and the railway and formed their own communities. Suburbs and roads were developed. The town was swept into the World Wars and embraced life’s modern conveniences in the post war boom.

Shoes from the Japanese part of town.

One of the two special exhibits was Art Deco Chic, a study of art deco influence on fashion. I  Ioved, loved, these dresses. And would love to wear them. This exhibit really whetted my appetite to learn more about the history of fashion. It is an interesting lens through which to view history. 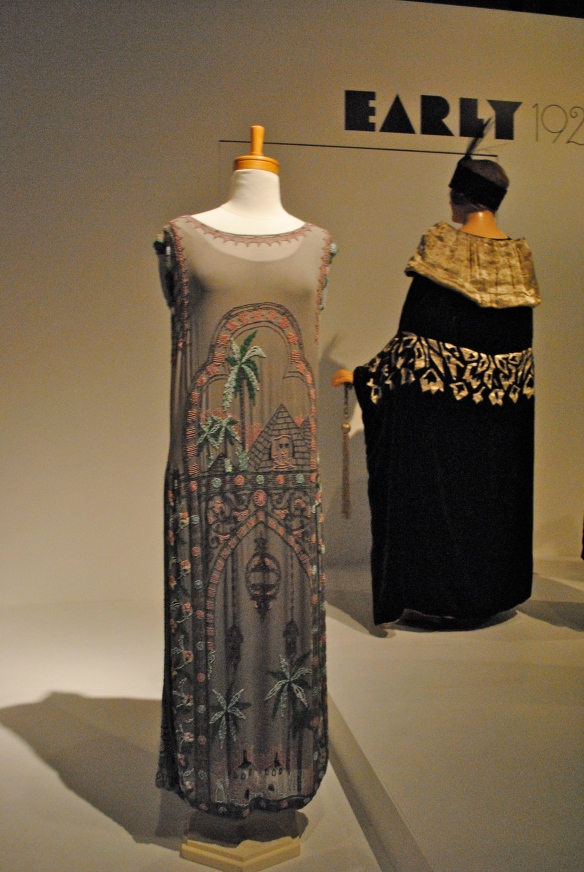 This dress from the 1920s was influenced by recent archaelogical finds in Egypt.

This dress was made in Vancouver by the Aurora company.

The second special exhibit was of neon signs from the city. As Vancouver has grown it has faced issues similar to other big cities: zoning, infrastructure, commerce. At one point it outlawed large neon signs. Many were destroyed, others left to languish in junkyards. The exhibit asks if the signs are an eyesore, or  art in themselves? You will have to decide for yourself.

But I think you know which way a magpie would lean on the subject.

After the calm of the museum we were ready to brave the Island again, this time to buy some goodies for dinner. The place was still bustling but at a somewhat lower decibel level. This time we actually went in a few shops, and stopped for a much needed cup of coffee. 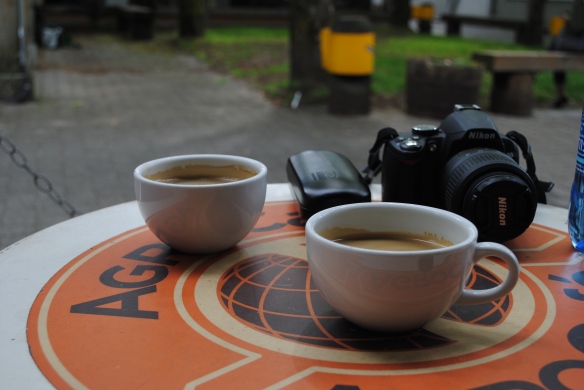 After making a few dinner purchases we boarded the blue tug for our final ride. Our heads were filled with the vivid sounds, smells and sights of the day. We looked to forward to having a dinner of market goodies in our room and watching the sun set behind the mountains. And we did.